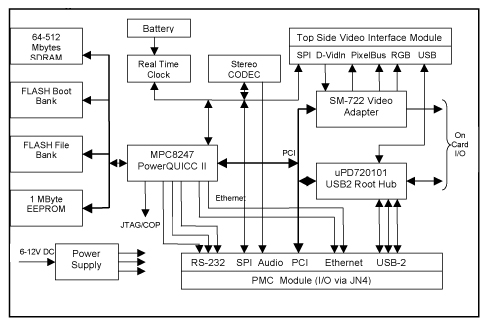 The BT-101A is powered by the Freescale MPC8247 PowerQuicc II processor. A System-On-Chip device, the MPC8247 provides a PowerPC 603e embedded core, along with a RISC based Control Processor Module (CPM) to manage I/O activities. At a maximum speed of 400 MHz, the processor provides up to 315 MIPS performance.Supporting to PowerQuicc is a memory subsystem, Video Controller, and USB Root/Hub controller.

I/O For Your Application:

Slightly larger than an IEEE 1386 standard PMC module, the BT-101A is designed as a compute node supporting common processing I/O on card. The local I/O interfaces are presented to an IEEE 1386 standard PMC interface on the bottom of the module, and a video interface on the top side. Most applications will require a custom adapter module for either or both of these interfaces to match the I/O requirements precisely. The PMC interface allows custom I/O devices to be interfaced directly to the processor through the familiar PCI bus, while on card I/O’s are available at the JN4 connector. Add Serial, Ethernet, and USB connectors and go! On card interfaces include one Ethernet, one USB, and one analog video, with the remainder on the PMC or top side interface connectors.

BT-101A supports two independent 10/100 BaseT interfaces for networking. On board MACs allow interface through the JN4 connector with a standard transformer and LEDs residing at the physical connector. Included in the PowerQuicc Ethernet controllers are extensive support for a variety of communications security protocols and encryption systems, allowing the BT-101A to support a variety of wireless networking prototcols.

BT-101A memory supports two independent banks of FLASH allowing from 8 Mbytes up to 256 Mbytes of NOR Flash devices to be installed. 32-bit width allows optimal performance. Each bank may be independently write protected with a jumper. The boot bank includes user code as well as the U-Boot startup for the Linux Kernel. The File Bank is configured as the file system for Linux. Main SDRAM is provided as a single 144-pin SODIMM module, allowing up to 512 Mbytes of synchronous memory. An optional EEPROM may be used in applications where power fail recovery is necessary.

The BT-101A not only uses fewer watts, it extends the life of your system because of the reduced power consumption.

ACME has been designing “Green” for over 20 years.

Contact us today to find out how we can help you have the most efficient, reliable, cost effective, green solutions.

The BT-101A uses the Silicon Motion SM-722 video controller adapter, interfaced via the on card PCI bus. The SM-722 supports one or two independent displays, configurable from 320×200 up to 1280×1024 resolutions. A single RGB output DAC is standard, a second is optional. Through the optional Top Side video adapter, the SM-722 pixel bus is available, allowing interface to virtually any LVDS flat panel via an appropriate encoder. PanelLink is supported standard by the SM-722.

The BT-101 includes a high speed USB2.0 root/hub interface for up to five USB devices. Intended for use in peripherals as well as mass storage (USB FLASH) applications, the interfaces are capable of operating at high speed 480 Mbps USB rates. One USB interface is available on the BT-101A with a connector, one on the top side video interface, and three on the PMC interface.

Three serial ports from the MPC8247 are available on the PMC interface, supporting RS-232C standard interface levels. The MPC8247 offers support for a wide range of protocols and data rates, independently selectable for each port. The flexible serial port controllers in the MPC8247 support a wide variety of current and legacy serial port protcols, complete with on chip DMA and interrupt management

The BT-101A includes an AC-97 compliant stereo CODEC. Audio line level input and outputs are available at the PMC connector.